I'd say it still only qualifies as a rumor, but there's talk of a sequel to the 2019 TLK remake being in the works:

We Got This Covered has been informed by our sources – the same ones who told us an Aladdin sequel was happening, which we now know to be true – that Disney wants to do a Lion King follow-up. According to what we’ve heard, though, director Jon Favreau isn’t so keen on the idea, which may mean that a new director will be hired to helm it. We’ve also been told that it’s not a sure thing just yet, but they’re certainly discussing it given the barnstorming success of the first one.

Unclear at this point is whether said sequel would just be a live-action Simba's Pride, or whether it would go in some new direction. If remakes like Aladdin are earning sequels of their own, though, it's hard to deny there's a possibility of more TLK movies on the horizon.

Apparently there is now a canonical answer to this age-old question: How did Scar get his scar?

Decades of speculation and fanfiction have covered possibilities such as clashes with large beasts such as wildebeests or rival lions to a lovers' quarrel, but now thanks to The Lion Guard it seems we have our answer.

Donald Glover appeared on Jimmy Kimmel Live on July 9 to promote TLK, as well as to talk about a number of behind-the-scenes topics:

Two official preview clips have been published to YouTube, giving us a look at how more of the characters will look, move, and emote.

"A Gift He'll Never Forget" features Scar and young Simba in the gorge, setting the stage for the stampede:

And "I'm Gonna Name Him Fred" is the scene of Timon and Pumbaa discovering Simba collapsed in the desert, with updated dialogue and repartee:

This livestream was broadcast tonight and featured the cast and filmmakers of the new movie, with interviews, behind-the-scenes anecdotes, and (at the 1:22:50 mark) a preview of the "Circle of Life" presentation scene!

Tickets can be purchased starting today at Fandango — and if you follow the link you'll get an in-depth exclusive interview between Fandango and TLK director Jon Favreau.

Jon Favreau: We learned a lot on The Jungle Book, and one of the things we learned is that if you push the facial expressions on an animal too much it starts to look less like an animal and more like a human. Part of the naturalistic approach of The Lion King that would have not fit in with our tone. Part of it is trying to make the animals express emotions without facial expression, so like in the case of Pumbaa, who is a very comedic character who has a lot of facial expressions in the old one, how do you make a warthog comical if you can't make him make faces? You have to look at the reference of warthogs in nature, and you start to see that they're very comical in the way that they move.

So, part of it was directing the animators to express the emotions of the characters, be it the lion or the meerkat or the warthog, in a way that is both consistent with what people would see in nature, but also to express the performance choices the actors are making. So, there’s a lot of body language that was worked into this piece. What’s nice is that as you watch the film all together, I think it's very successful. But it definitely is one of the things that created one of the bigger challenges, to try to help bring the charm and humanity of the original productions into this without having the ability to manipulate the facial expressions and the naturalism of the animals to the extent that you could in animation.

Charlie Quigg sends this compilation of TLK trailers, which includes one (skip to 1:00) for the Japanese market which features dialogue that gives us a good idea of how JD McCrary (young Simba), Chiwetel Ejiofor (Scar), and James Earl Jones (Mufasa) sound in this new outing.

Behind-the-scenes interview with the director of the new film, giving us some insight into his thought processes and goals:

Favreau says the new Lion King cleaves largely to the animated film. “We are working off a story that works really well, but the more we looked at, the more we challenged the story. There were certain things that needed addressing to make it feel more appropriate to this medium, but as far as the characters, the story, the themes, the music, we really felt that people were very connected to the original, and so hopefully if you are a fan of the original you will look at our film and say, ‘I feel like I saw The Lion King.’”
...

In the end, Favreau hopes The Lion King feels emotionally as realistic as if audiences were watching live creatures. “That’s the trick here,” he says. “Because I don’t think anyone wants to see another animated Lion King, because [that film] still holds up really, really well. Doing The Jungle Book gave me a lot of encouragement. I saw The Lion King as a great opportunity to springboard, refine the tools, and tackle this beloved story in a new way.”

From Nala's perspective, and thus posted (appropriately) on Beyoncé's channel.

Since 1995, The Lion King WWW Archive has been the premier site for information, multimedia, and online services for fans of Disney's The Lion King. 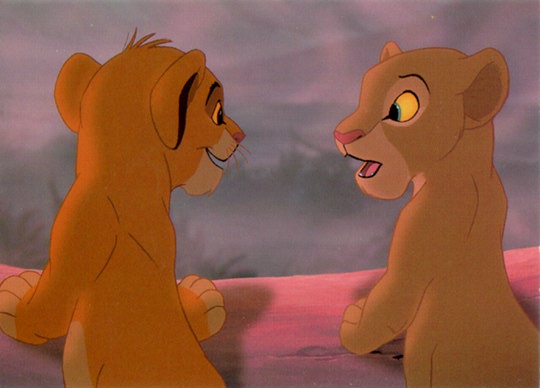